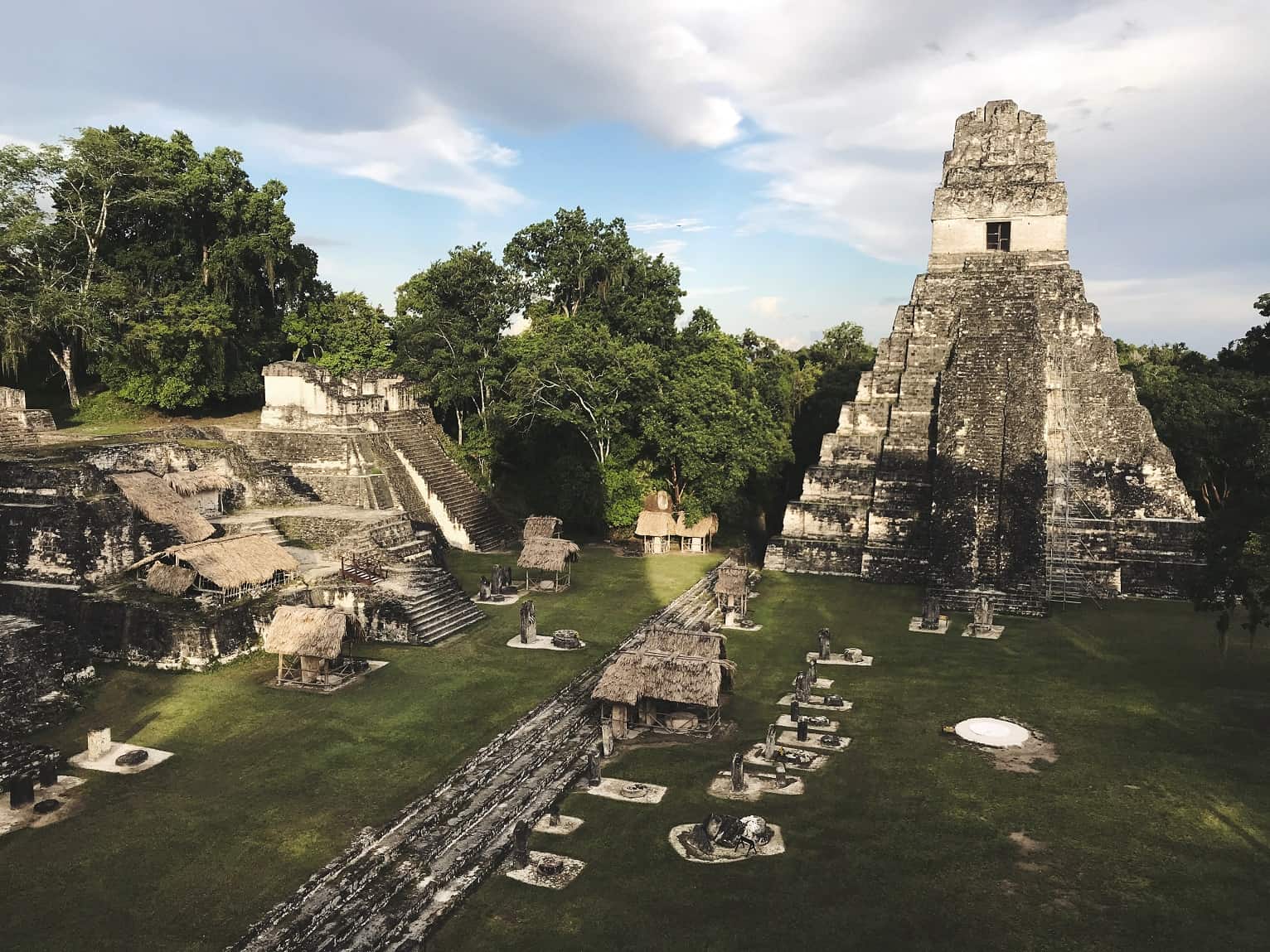 It was New Year’s Day, and we stopped in Flores, Guatemala for lunch on our way to Tikal National Park.

The small island on Lake Petén Itzá, connected by a causeway to the mainland, was eerily empty.

Only a few shops were open and almost no one was out on the street.

We found a spot for lunch.

Afterwards we walked the entire picturesque island before continuing on to Tikal.

It’s the perfect stopping point for anyone driving from Belize to Tikal. 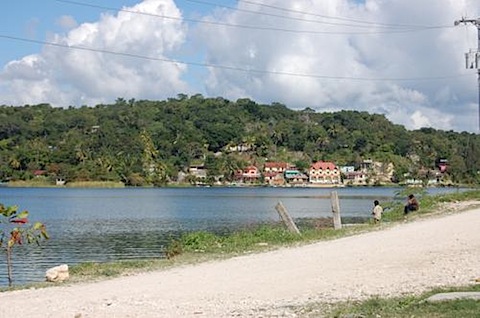 Now the plan is to go to Tikal National Park in Guatemala for a few days to see Mayan ruins.

Most visitors come to the park, located in the rainforest of Guatemala’s Petén region, to see its expansive ancient Mayan ruins.

But the array of wildlife draws tourists and bird-watchers from around the world.

Tikal is a national park as well as an archaeological treasure

We had planned to stay in Guatemala longer than this but after our extended travel to Argentina, we are feeling the effects of travel burnout.

We were disappointed we were not going to be able to experience Guatemala in the way we’d hoped.

But at the same time, I realize that with long term travel, it is often hard to fully appreciate everything in our burned out state.

I’m glad we decided to save it for a future trip, and I’m looking forward to getting to experience Guatemala at a later time.

After studying it in school, I’ve been fascinated by the Mayan history and people.

My first visit to Mayan ruins was to Lubaantun in Belize several years ago.

Since then, I’ve also been to Xunantunich, a magnificent spot near San Ignacio, Belize.

Because of these trips, I felt well-prepared for our visit to Tikal National Park in Guatemala.

But I wasn’t prepared for Tikal.

The grounds were far more expansive than anything I expected and the number of buildings was amazing.

But even the size didn’t surprise me as much as the number of unexcavated ruins.

Less than 20% of the ruins at Tikal National Park are excavated.

Hidden for centuries in the overgrown jungles exist a fallen empire and the remains and ruins of a great ancient city. 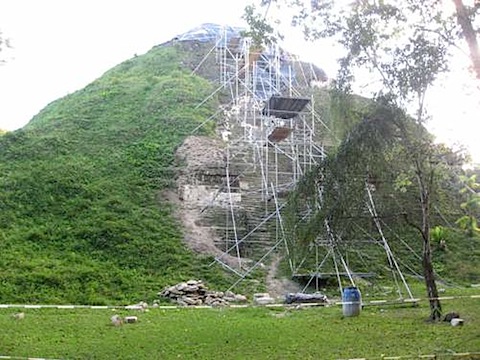 This means that as you go from temple to temple, you walk by huge mounds of dirt and grass, often with large trees sticking out.

And do you know what’s under these trees and grass? 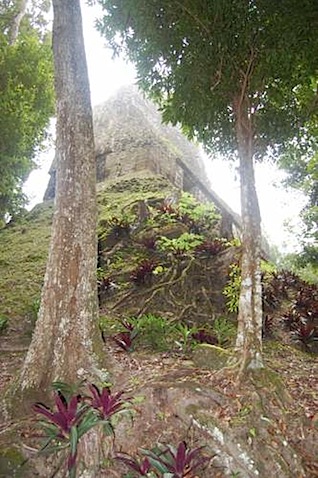 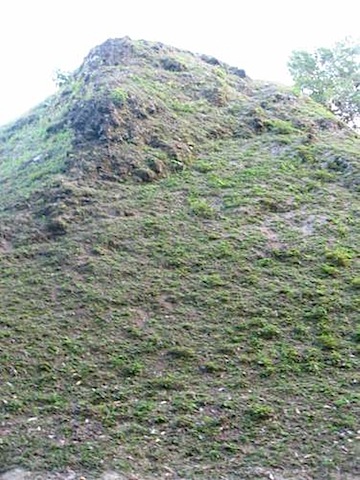 It absolutely astounds me that there is so much yet to be uncovered.

Buried in these ruins there could be tools, jewels, hieroglyphics, and more.

As I wandered the grounds, my imagination running wild, I thought about the future of the Tikal Ruins.

I first thought of all the archeology students who could study abroad in Guatemala and excavate.

They’re cheap labor and their universities could fund the research.

The Guatemalan government doesn’t have the money for excavations.

But then it occurred to me that perhaps we should leave the ruins in peace.

And visitors to Tikal can continue to ponder the mysteries of the hidden Mayan ruins.

What do you think?

There are 18 km (11 miles) between the main entrance of Tikal National Park, Guatemala and the actual visitor’s gate where you can walk the grounds.

Unfortunately for anxious visitors, but fortunately for the many animals of Tikal, the speed limit between these entrances is only 45km/hr (27 mph). And it’s enforced.

It’s incredibly ironic that this is the smoothest paved road in Guatemala.

The drive through thick jungle felt long as we were so excited to get to the Mayan Ruins.

But the signs posted along the road gave us hope for animal sightings.

Along that 11 mile drive, we only saw a turkey and coati; luckily we saw many more later that day.

But the signs are fun and not road signs you’d see on your average day of driving anywhere else in the world. 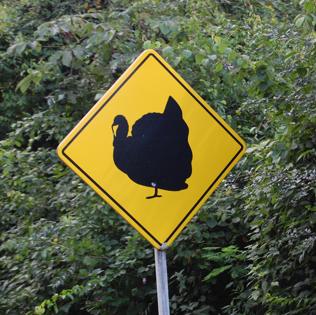 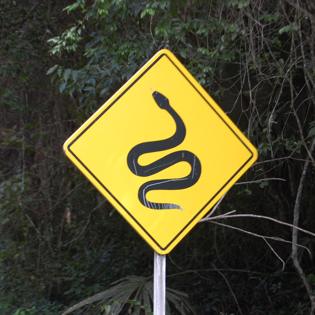 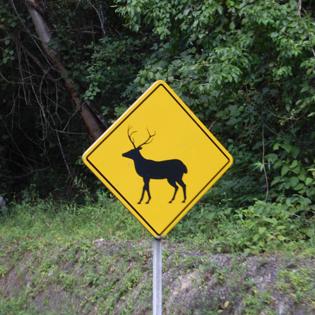 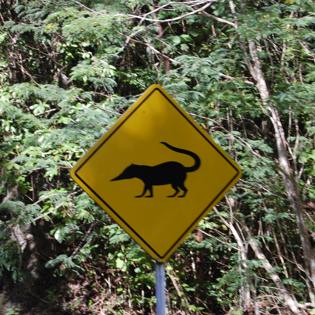 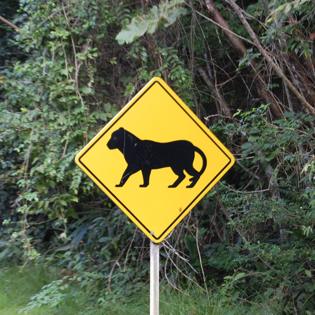 From spider monkeys and toucans to jaguars and parrots, Guatemala’s Tikal National Park (Parque Nacional Tikal) has it all.

Since we only had two days to spend in Tikal, we decided to maximize our experience by staying in the park rather than in town.

We stayed in Jungle Lodge, a very basic bungalow-style hotel.

There’s also camping inside the park.

We watched the sunset from a Mayan temple and woke up with the animals at dawn.

After spending time at Iguazu Falls and Peninsula Valdes in Argentina, we were excited to see the native fauna of Guatemala. 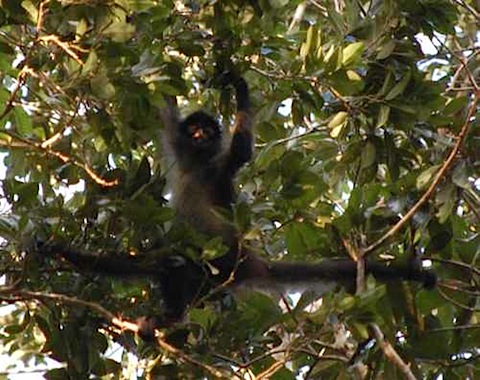 As we hiked to a Mayan temple, we heard a rustling in the trees above.

Then, as bits of discarded monkey food rained down around us, we looked up and spotted a group of four spider monkeys swinging through the trees above us. 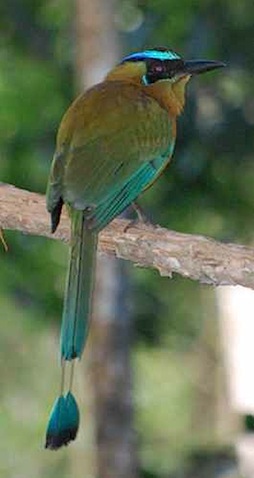 What struck me most about the blue-crowned motmot was its unique tail, which looks like it’s missing a section at the end.

According to my wildlife reference book, it’s called a “tennis racket” end. 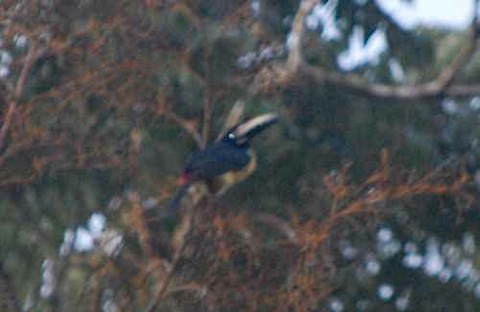 Although Tikal National Park is home to a variety of toucans and toucan relatives, we only spotted the collared aracari.

There was a group of five of these smallish birds high above us in the trees.

They hopped around quite a bit so it was hard to get a good photo of them. 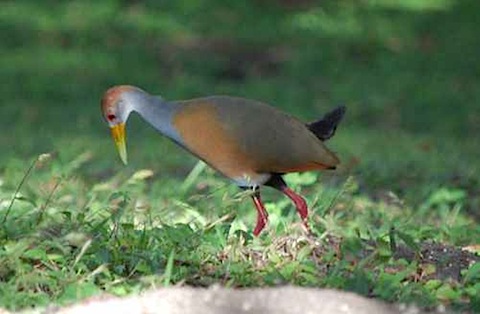 This duck-sized bird was scouring the grass near a swamp for insects, then plunging its beak into the grass when it found one. 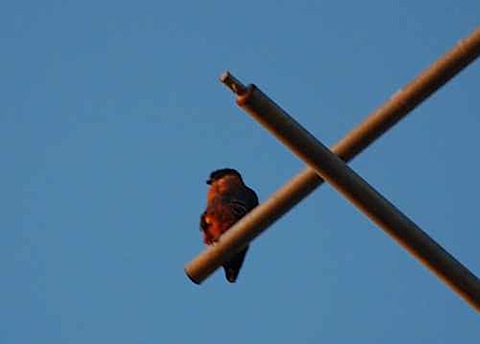 The orange-breasted falcon is an endangered species in Guatemala, with only 50 breeding pairs left in the country.

This one is nesting in Templo IV, and we spotted it guarding its nest from the scaffolding outside the temple. 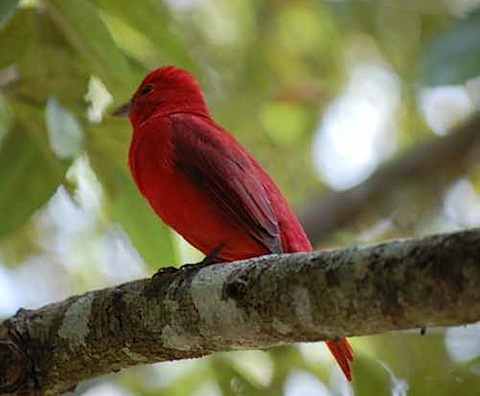 When we ran under a tree to avoid the rain, we looked up and saw this male summer tanager.

Its bright red color contrasted brilliantly with the green leaves behind it.

These birds are seasonal migrants to Guatemala. 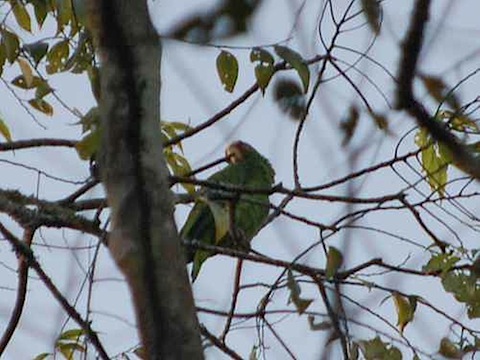 It’s hard to miss parrots in the park, since they squawk loudly as they fly around.

They usually travel in pairs.

This red-lored parrot flew in with another, then landed in the tree above us.

It took me a while to spot him since his feathers are perfect camouflage in the trees. 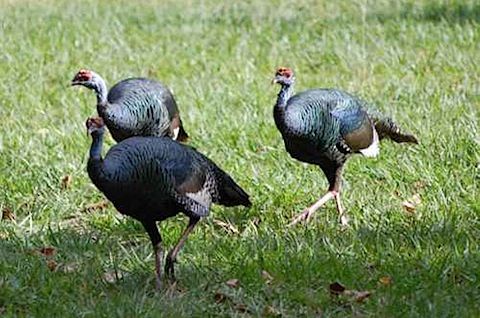 This outgoing group of Ocellated turkeys was hanging out near some picnicking locals, likely waiting for leftover food. 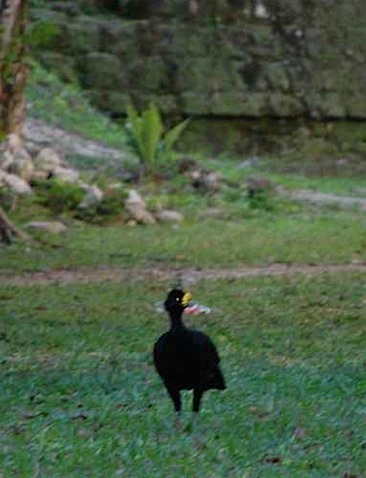 We spotted a few of these large birds wandering around Mayan temples.

We only saw males, though; females are brownish in color. 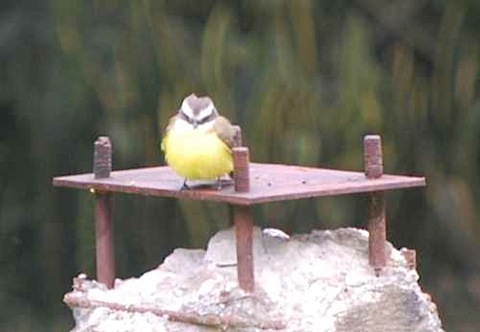 After our early morning hike through the jungle, this small yellow flycatcher was perched on a pillar. 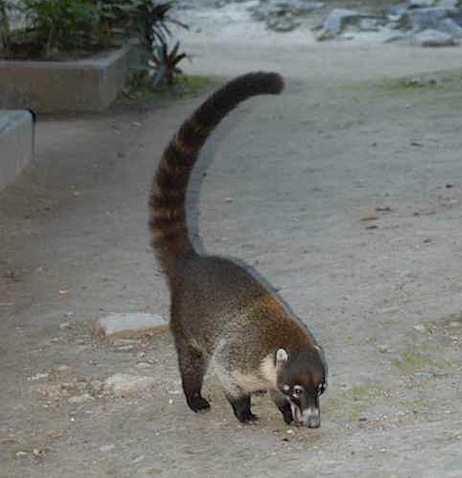 Just like the coati we saw in Iguazu Falls National Park in Argentina, this guy was hanging out near people scavenging for food. 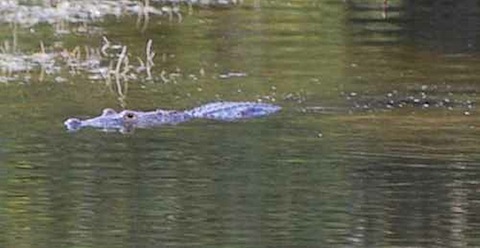 This baby crocodile was swimming through a swamp near the visitors center in the park, taking in all of the tourists.

We learned that sometimes they find poachers in the area.

They may hunt jaguars, pumas or crocodiles for their skins.

They chop down unique and rare trees to make and then sell as furniture.

They even have been known to uproot endangered plants and flowers.

In rare instances, they have even found these poachers living deep in the forests.

When we woke up at 5:00 am on our second day in the park, we were greeted by the eerie calls of howler monkeys.

We searched for them as we hiked through the jungle an hour later, but didn’t spot any.

If I hadn’t seen a group of spider monkeys and some awesome birds, I might have been disappointed.

But the wildlife and Mayan ruins I saw in Tikal National Park made our time in Guatemala the best part of this leg of our trip.

While we came here from Belize, we have friends who flew from Guatemala City to Tikal National Park and flew over active volcanoes and jungles.