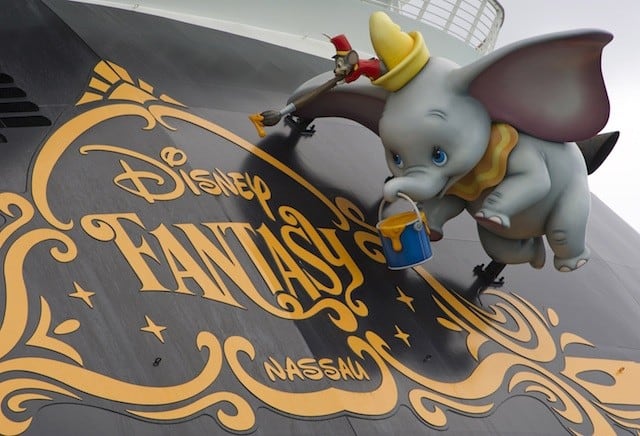 Last month, my kids and I were lucky enough to sail on the media preview voyage of the Disney Fantasy, the newest ship in the Disney Cruise Line fleet of four.

Having conducted research on how small ship cruising is the best green cruise line option, I had concerns about the eco-implications of our trip aboard this 130,000 ton, 4,000 passenger ship.

Specifically, I wanted to know: is it possible for families to keep both their kids and their environmental conscience happy by cruising with Disney Cruise Line?

What I learned about Disney’s green cruise line measures:

All four Disney ships, the Wonder, Magic, Dream, and the new Fantasy, leave an impressively small footprint for such large ships.

Anyone familiar with the Disney model will not be surprised to hear that these green cruise ships go beyond international and federal regulations, with some added creativity tossed in.

Where did you think the Mickey Pool water came from? 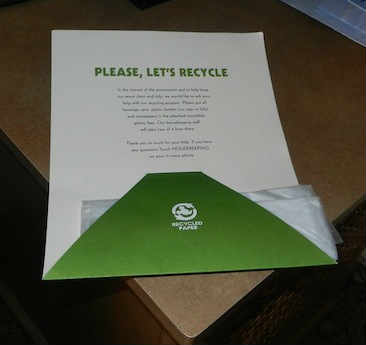 Thirty-three percent of the water used on board Disney ships is reclaimed from condensation in the air conditioning units, and re-used to wash the decks.

Reuses food grease as fuel for vehicles on Castaway Cay.

So much food goes to waste on a cruise ship, I loved learning that at least all that oil and grease in the galley was going to good use.

Donates a percentage of every StringRay Adventure excursion to the Disney Worldwide Conservation Fund.

This conservation fund has awarded nearly $18 million to conservation projects in 112 countries to date, and works in the Bahamas and Grand Cayman specifically to restore the sea turtle population and protect the Castaway Cay stingrays.

It’s also a great idea to stop by and see them at Disney’s Animal Kingdom park. 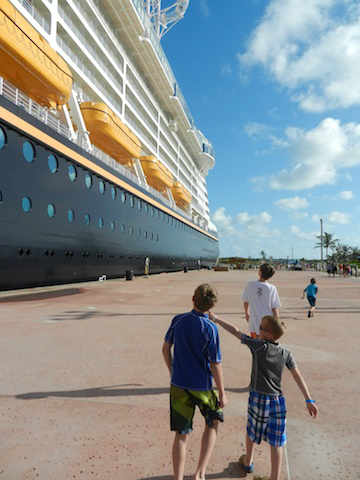 Adds an innovative hull coating on all Disney ships.

This coating is both 100% nontoxic and effective in increasing fuel efficiency at sea.

According to the Fantasy Dedicated Environmental Officer (all ships have one), this measure ensures the Fantasy glides through the water with less resistance, saving energy.

Recycles just about everything, and trades plastic for cloth.

All large cruise ships are now required to implement on-board recycling efforts, but while we were on the Fantasy, even I was impressed with just how far Disney takes this responsibility.

Numerous recycling categories were represented at all the guest bins, including not just bottles and cans but glass and paper.

And they were so easy to find! Recycling directly in our stateroom was convenient and easy, too.

I also noticed that most of the stateroom bags, such as laundry bags and bags storing items like hair dryers, were cloth instead of plastic.

3 things families can do to make it more of a green cruise:

Reuse towels in the stateroom and on the pool decks.

On the decks, keep your towels on chairs with your personal affects (not tossed on the ground) so that they will not be picked up and placed in the laundry before you’re done with them for the day.

In your room, hang up towels that can be reused, and re-use those cute Disney towel animals as wash clothes and bath towels.

On Disney Cruise Line, soda, water, and tea refills are included in the cost of the cruise (an industry first).

But for hygienic reasons, guests are asked not to reuse the disposable cups dispensed at the refill stations.

Bring your own green water bottle instead and fill ‘er up!

You’ll save trips to the refill station and save a few cups.

Clean young kids up in the small bath instead of the shower.

While water savings in a bath vs. a shower are negotiable, the unique circular bathtubs on Disney Fantasy are shallow enough to make it a moot point.

You’ll save far more gray water (and you want as little gray water as possible on a cruise ship) bathing toddlers and babies than fighting the shower spray.

Is a Disney cruise the greenest family vacation you can take?

No, but by following the easy measures above, as well as opting to cruise with an eco-conscious green cruise line like Disney, it is possible to be environmentally responsible while cruising.

Photos courtesy of Disney Cruise Line and Amy Whitley. Amy and her family experienced the Disney Fantasy as guests of Disney. All opinions on this green cruise line are her own.

Many cruise lines and cruise companies are going green.

The name Disney has been a trusted household name for years, especially when it comes to television and theater entertainment or the well-known theme parks; and now Disney has made an addition to its repertoire with cruise liners.

The division of the company that operates the cruise lines quickly found out the implications of carbon emissions that come with operating ships.

In an effort to uphold the positive image of Disney and its responsibility to the environment, the cruise lines have vowed to go green.

Disney Wonder and Disney Magic can each hold approximately 2,700 passengers.

Guests can choose from a number of cruise themes, including Bahamian, Caribbean, European, Alaska, and the California coast.

The cruises are also available in various lengths of time; from 3 days to 14 days.

So you can begin to imagine the amount of water, energy, and waste usage that could come from this many passengers, plus about 950 crew members, at sea for 14 days.

To give you a more precise idea, energy use and carbon dioxide emissions were calculated to the equivalent of 270,000 tons of carbon in 2007.

These astounding numbers, made Disney realize they needed to make some changes to improve the footprint the cruise lines was leaving on the environment.

Some of the immediate changes they made are as follows:

These smaller changes resulted in the cruise lines having 5% energy savings.

This was just the start of the company’s efforts.

Bigger changes were made, and of course, had a bigger impact on reducing carbon emissions.

Here are some of the bigger changes that have been made:

The water used for the laundry facilities is generated from the air conditioning system.

Some might think this doesn’t sound like it would generate very much water; however, it is estimated to produce 280 tons of water per day.

Evaporators are powered by excess heat, which in turn takes 1,200 tons of seawater and turns it into potable water each day.

Each ship is staffed with an environmental officer who monitors the green efforts, as well as teaches the staff and guests how they can best contribute.

The ship hulls were covered with a non-toxic silicone coating to improve the glide through the water.

This creates less drag and eases use of the engine.

The cooking oil that is used aboard the ship is saved and taken to Disney’s private island, Castaway Cay, where it is used to power machinery.

This results in a savings of about 8,000 gallons of fuel each year.

Things like aluminum, cardboard, and other recyclables are saved in separate receptacles from standard garbage.

This diverted approximately 405 tons of recyclables from going to the waste stream.

Other materials and furnishings that are no longer in use are donated to communities in need at the various ports the ships stop at.

So, you can see that Disney is putting their green foot forward.

The company provides a variety of environmental and educational programs to the crew members, as well as guests.

The crew also takes part in clean-up efforts and habitat restoration efforts around the world.