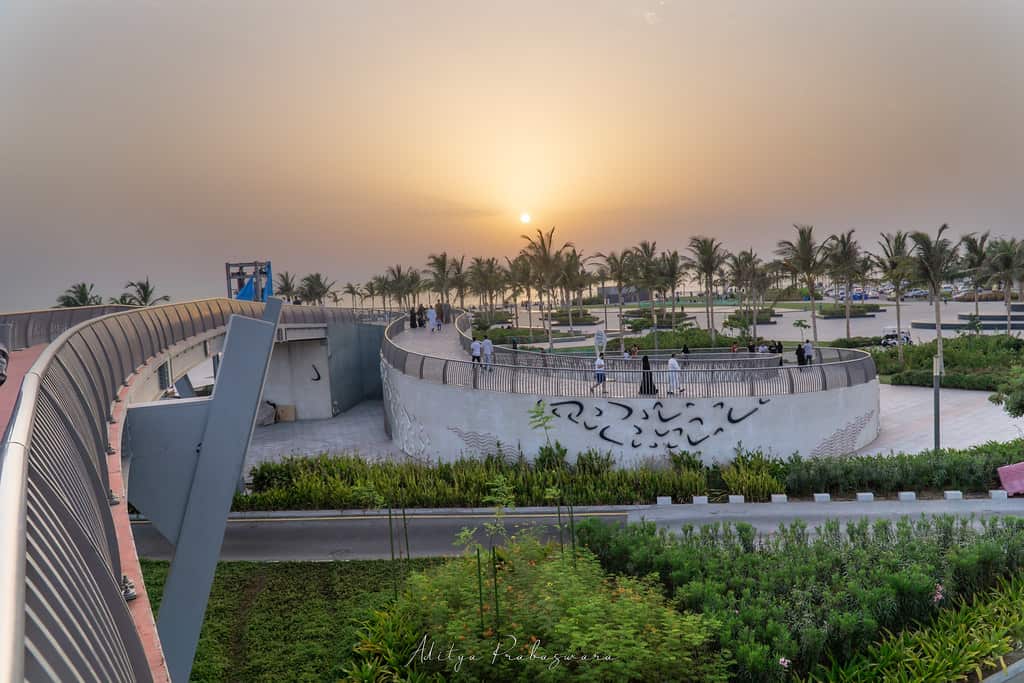 Jeddah Attractions tourists are loving – The Saudi Arabian port city of Jeddah is a beautiful place situated on the Red Sea and is known for its business and innumerable commercial establishments.

The city also has an ancient past that can be seen in its many Ottoman-style buildings.

Coupled with its rich past, the contemporary structures of the city along with the ancient ones fully complement each other, so that visitors to Jeddah can expect to see some lovely views.

Visiting Jeddah during the winter months is quite pleasurable as the weather during the period stays pleasant and enjoyable.

In recent years, there has been a renewed vigor among tourists to visit the city.

Jeddah has many attractions for the travelers as discussed here.

The Old Quarters of the city

A stroll through the old quarters of the city can be quite relieving as one can see the many unusual structures that were built during the earlier era.

The quarters which are situated in the southern part of the city are among the most popular ones among tourists.

There are two beautiful mansions over here known as the Nasif and Sharbatly, which have a stunning decoration inside them.

These mansions were built by noble tradesmen and stand testimony of the times.

Are situated on the northern coastline of Jeddah and is a wonderful place for people who would like to take a relaxing walk along the waters.

It starts from the Hilton, and moving through the traffic area, it goes all the way to the north.

It is an enjoyable place with ample greenery, sufficient landscaping, swimming bays, cafes, and many fast food joints.

The evening atmosphere of the place is buzzing with energy.

Numerous museums in the city

Jeddah is popularly known by tourists as ‘the city of monuments and markets’, and therefore it is not a coincidence that it has many museums that attract a lot of tourists.

Starting with the local Municipal Museum where a large collection of artifacts is present, history lovers can also visit the Jeddah Museum that showcases many archaeological pieces.

For painting lovers, a visit to The Museum of Abdel Raouf Hassan Khalil will be quite enriching as it has paintings from the 17th to the 19th .

Apart from them, visitors can also see the Matbouli House Museum that has some very old gramophones and telephones, and it is housed in a period-era three-story building.

The Al Tayibat City Museum for International Civilization is a private property in a four-story building.

Information is sufficiently displayed through sign panels and a private tour can be availed here.

Visiting Jeddah without going to its mosques would be incomplete.

The city has some stunning mosques that look overwhelmingly charming.

The Al Rahma mosque in northern Jeddah is a masterpiece of architecture, as it literally floats in the Red Sea and that is why it is also known as the Floating Mosque.

The complete structure is made up of marble.

Since it is located on the coast, sea waves keep washing the base of the mosque at all times.

Another breathtaking structure is the Al Shafee Mosque that dates back to the 16th-century and features an Ottoman-style minaret.

The foundation of the mosque is about 1,400 years old, and it has carved redwood doors that lead to its small courtyard.

Everyone may not be as lucky to get access inside the Naseef House.

Hence taking an appointment for visiting this awesome place is very important.

It is one of the old coral houses of the city that has been carefully preserved.

It was the living place of one of the kingdom’s most powerful trading families. and at one point in time, King Abdul Aziz also stayed here.

There is a huge tree on the left of the door and a ramp is also there that was built for the camel-mounted messengers of the king who could go to the upper terrace.

Undoubtedly, the Naseef House is a treat to watch.

Bab-Makkah is a huge three-arched gate from below which pilgrims pass through to the Islam’s holiest city.

The structure was amply fortified during the ancient period.

Similarly, Bab-Sharif is also a type of fortification gate and is among the six gates that completely surround the city.

They hold relevance for the city till today as one can get a glimpse of its royal past through its architecture.

The North City gate is yet another addition to the list of fortifications of Jeddah.

The colorful markets of Jeddah

Visiting Jeddah is complete with a visit to some of its colorful markets.

The Souq Al Alawi is one of the most preferred places for people who want to buy Arabian jewelry, traditional dresses or Islamic art.

This area on the Al Dahab Street is buzzing at all times, but during the sunset prayers, the atmosphere of the place becomes truly stunning.

Fish lovers can head to the Fish Market in Jeddah that is situated very near to the Corniche.

Many different types of fish are seen and bought here.

Even the lesser known fish variants in other parts of the world like hammerhead sharks, squids and parrot fish are available here, and that is why it is a chosen destination for many fish lovers.

Jeddah is a bustling city with a lot of activities to do and places to visit.

Moreover, it is well-connected to most of the major cities in the world.

Additionally, Cebu Pacific booking has further helped a lot of people to visit the place and discover the many points of interest in it.

That is why Jeddah is fast-becoming a tourist hotspot and more people are visiting Jeddah Attractions than ever before.