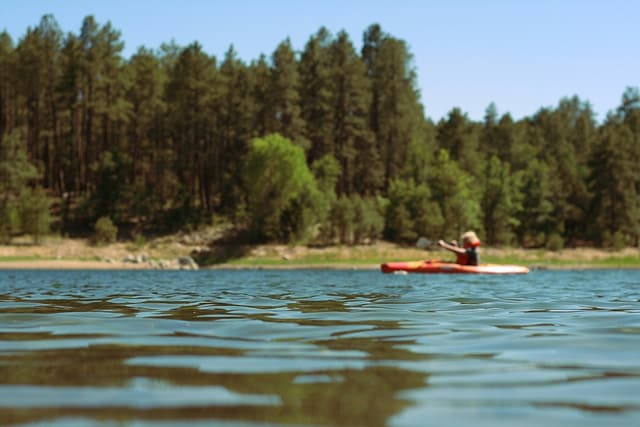 Prescott Arizona with Kids – When it comes to exploring new places, I like traveling by car best and being on the road to Prescott Arizona with your kids. Recently, I packed up the family to visit Prescott, Arizona. It’s a small city with a picturesque downtown and plenty of outdoor recreation. With lots of things to entice the kids, Prescott has become one of our favorite destinations. The first thing to know is how to say Prescott. It’s not press scott … it’s press kit. We learned a lot while visiting Prescott!

We spent considerable time in the historic downtown district. It reminded us of what it must have been like in an old west town. Downtown is a great place to find a distinctive hotel and restaurants that serve hearty and delicious meals. However, I love it most because of its courthouse, museums and theaters.

In the center of downtown is the historic Prescott Courthouse Plaza. The lush grass and lots of benches make it easy to enjoy this park-like setting. We saw people walking their dogs, laying in the grass, playing music, and playing catch. Just across the street are ice cream and yogurt shops. We bought some and brought it back to the Courthouse square to enjoy.

We enjoyed the Sharlot Hall Museum. It’s been a Prescott institution for more than 80 years. The 1864 Governor’s Mansion is part of the complex as are seven other historic buildings. Also interesting are the exhibits highlighting Prescott’s history and the well-kept gardens. The gardens are also notable because they frequently host festivals.

We also visited the Smoki Museum. This place offers a different perspective from the other museum, as it focuses on Native Americans. There is basketry and other handicrafts on display. The kids particularly enjoyed seeing what the daily lives of Native American kids their own age were like.

While we did not have time to enjoy one of the performances, we were told they are spectacular. Pretty nearly every musical genre is represented at one time or another. Our friends raved about a wonderful folk music performance.

What was most interesting to the kids was the living history exhibits. We were there to see The Prescott Regulators & Their Shady Ladies, Inc. perform their 9th Annual Shootout on Whiskey Row. It was fantastic. While it was a very hot day, I was impressed to see the actors in their heavy costumes, staying in character the entire time.

We also walked along Whiskey Row. Of course, it’s changed a lot since its wild west days when it earned the name Whiskey Row for the unbroken lines of saloons on either side of the street. Stories suggest that there were as many as 40 saloons in one block. Today much of the architecture is the same, but many of the saloons have been displaced by unique shops. A few of the historic taverns are still in place. Whiskey Row is found along South Montezuma Street in the 100 block.

Prescott is known for having excellent weather and tons of natural beauty. We also saw some interesting wildlife. While we were driving through one of the neighborhoods, we saw our first-ever javelina. I wish the picture came out better.

We spent two wonderful afternoons at Goldwater Lake, which has recently been dedicated. There is a minimal per car fee. There is a 15-acre lake and is surrounded by gorgeous trees. The playground was almost brand new, and everything was empty, despite the pleasant summer day. We went here twice. The first time to hike, to skip rocks in the lake, and to play at the playground. The second time, a Saturday, we rented kayaks. In-season, there are kayak and canoe rentals on weekends per hour. We all had a lot of fun here. We brought our lunch both times and enjoyed the nicely shaded pavilion and picnic tables. The next time, we’ll know to bring some fishing tackle. The anglers were definitely having a good day at the lake.

The very same day we were going to explore Watson Lake we saw in the newspaper at our hotel that there was going to be a disc golf competition there. We didn’t know how crowded it would be so we ended up going back to Goldwater Lake. While we never made it here, we learned there is a playground, hiking trails, and more. Like at Goldwater Lake, you can rent kayaks or canoes on the weekends.

We learned of this park as we checked out of our hotel and were leaving town. We look forward to exploring it the next time we visit Prescott.

We also spent a day at the fantastic Prescott National Forest. It covers 1.25 million acres. Within that expanse, we could explore deserts and mountains. The forest stretches on both the east and west sides of Prescott, and it’s remarkably easy to get to.

We decided to focus on the Lynx Lake Recreation Area. It’s a very popular spot within the national forest, and has many fun things to do. Several trails are in this part of the park, so we did some exploring on foot. We saw just a few mountain bikers on the trails. While driving through, we happened upon a gold panning site. We had fun looking in the water but didn’t have gold panning supplies. We will next time, for sure! The highlight for us at Lynx Lake was seeing this guy walking down the street.

My husband nearly swerved off the road, it seemed that big! We were excited to get out and see him up close. Other fun road trips we’ve been on include visits to Arizona Apache Trail Drive, Las Vegas with kids, Visiting the Hoover Dam, Tour Amazon Fulfillment Center ~ Free Warehouse Tour as well as Iowa, Chicago, Nebraska, Wyoming, Utah, What to do at the Grand Canyon in the Winter and Tucson Attractions Make It One of America’s Favorite Places and Phoenix Airport Guide

Prescott has a number of fun attractions that are designed for the entire family to enjoy. If you are there in the summer months, you will likely see some Phoenix residents enjoying Prescott to escape the heat. While it’s a relatively close drive — less than two hours away — it’s a world away temperature-wise in the summer. From outdoor recreation to fun museums in a lively downtown area, Prescott Arizona with your kids that has something for everyone.