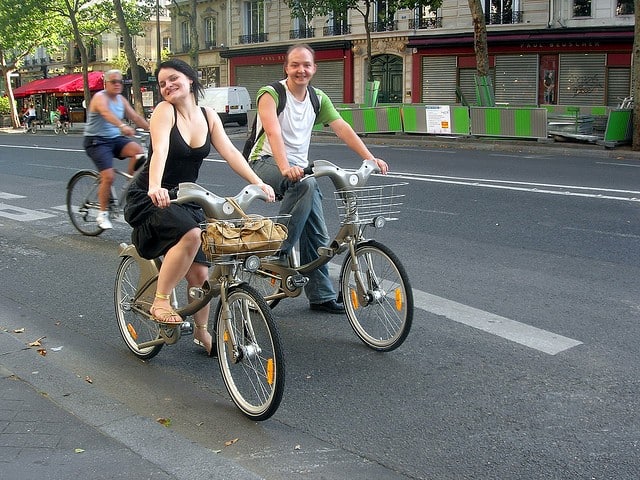 Eco Friendly Places to Visit in Paris – It’s one of the most visited destinations in the whole world.

Millions of visitors from all over the world come to take advantage of its pre-eminent landmarks, famed cuisine and captivating cultural attractions.

But the unfortunate thing for Paris is that this hive of activity undoubtedly increases its carbon footprint.

After all, there are 19,500 taxis in circulation and 30,000 rubbish bins situated across the city.

Thankfully, eco-conscious travelers can still experience the boons and benefits of Paris breaks without contributing too much to the city’s emission levels or waste output.

You might be surprised at just how green the capital of France really is.

Paris is the most densely wooded capital of Europe and features 400 green spaces.

In fact over the past 15 years, the city government has been revamping and revitalizing vacant land into parks.

Although it’s difficult to pick just one to visit, a stroll around the Jardin du Luxembourg makes for a delightful afternoon activity.

Pro tip: For day trips where you want to mostly travel by bike or foot, it’s recommended you store your luggage at Gare du Nord or somewhere convenient and get a bike for the rest of your trip.

With an all-organic menu, where dishes are cooked using locally grown produce according to seasonal availability, BioArt is one of the city’s leading eco-eateries.

Having said that, some traditional French fare featuring ingredients like truffles and scallops can also be found.

Vegetarians and vegans are well catered for too, with options closely resembling the vibrant red and green walls.

While salivating over your sustainable specialty, you can enjoy a superb panoramic view of the Seine River out of the unobstructed windows.

Despite holding the post of marketing executive for L’Oreal, Bruno Louis shunned mainstream design in favor of sustainable style.

The London School of Economics graduate founded Ekobo as an ‘eco-citizen company’ after travelling the world, in particular Vietnam.

He now works with artisans from the country and imports handmade housewares made of fast-growing bamboo.

These unique objects, which range from fruit bowls to flower vases, are ecologically responsible but still boast aesthetic qualities.

When it comes to souvenir shopping, you really are spoilt for choice in Paris.

You’ll be tempted to buy a miniature model of the Eiffel Tower, but more quintessential ideas include foodstuffs like macaroons and chocolate or clothing accessories such as jewelry and perfume.

But if you have concerns about how your perfume is made, head to Honoré des Prés, as this boutique has a range of organic, phthalate- and chemical-free scents on offer.

You can also go about your holiday sustainably by using public transport and avoiding the use of your own vehicle, as well as generally observing green practices.

With 16 lines and 300 stations, the Paris Métro is arguably the best way to navigate the city.

It covers a huge area and is quite efficient too.

The Tramway network and Suburban Rail are also other options.

The city’s Vélib scheme, which allows you to hire a bike from thousands of rental stations across the city, is great if you don’t want to take the metro everywhere.

It’s not very expensive and you can rub shoulders with locals doing exactly the same thing on their daily commute.

Look for the green label

When booking your accommodation, look for hotels with the title of La Clef Verte (Green Key) or the European Eco-Label.

This shows they adopt an environmentally friendly approach to water, energy and waste.

Don’t just dump your trash in any old bin.

Paris has a color-coded garbage system to improve recycling efforts.

Yellow bins are for recyclable materials, such as paper, plastic, and aluminum cans, but grey bins are reserved for regular rubbish.

Paris may well be a busy, bustling city, which doesn’t exactly help its environmental footprint, but visitors to the capital of France can have an eco-friendly time by visiting the right places and keeping the right principles in mind.

Paris is world-famous for its spectacular art museums, such as the Louvre (everything from pre-historic to Egyptian to Greek and Roman to Renaissance), the Musée D’Orsay (impressionist), and the Centre Pompidou (modern and contemporary).

But there are several lesser-known museums that are perfect places to spend a drizzly day when do you don’t think you can handle one more masterpiece.

This museum in Paris’ Marais district depicts the city’s history from medieval times through the Belle Epoque.

Rather than being room after room of dull explanation of historical events, the Musée Carnavalet is home to fascinating artifacts from each period.

Some of my favorites are from the French Revolution—including the locks of Marie Antoinette and her children’s’ hair, a gift to the recently deposed King Louis XVI.

Upstairs, there is a recreation of an early-19th-century watering hole, with all the delightful Art Deco touches.

There are several paintings, to be sure, but the museum puts them in context with historical events.

And the best part about the Carnavalet?

Also in the Marais, the Museum of Hunting and Nature is a surprisingly twee assortment of everything having to with animals and, er, hunting them.

If you find it impossible to “please do not touch,” this is the museum for you.

Throughout the permanent exhibit there are drawers to be pulled and field glasses to be gazed through and bird call buttons to be pushed.

Just don’t sit on the antique chairs—there are thistles on them to warn you away. (Like I said. Twee.)

You can find several curio cabinets, each devoted to a single beast—complete with drawings, examples of the food it eats, and even its merde.

A “trophy room” displays the mounted head of several fauna from forest and jungle and the unicorn room features a teddy bear creepily preserved in a bell jar.

Located on the Right Bank in the same former military hospital as Napoleon’s tomb, the Army Museum is a good way to inject some testosterone into your frilly Paris adventure.

This museum hosts every kind of body armor you could think of.

There’s even a suit of armor with a carved silver mustache on the face. Awesome.

Take a gander at the ancient weaponry Mother France used to ensure her everlasting freedom and prosperity, and marvel at the craftsmanship that went into preparing each piece.

While you’re there, you may as well pop in next-door to see Napoleon’s out-of-proportion shrine to himself.

Napoleon III’s Apartments at the Louvre

Speaking of Napoleon…If you’re not going to be able to make the day trip to Versailles but still want to get your fix of sparkly grandeur, visit the Louvre apartments of the big guy’s nephew, Napoleon III.

With red velvet furniture, golden everything and chandeliers as far as the eye can see, a jaunt in here can make you feel like a fancy noble dripping with jewels in late 1800’s Paris.

Make sure to take a peek at the diamond-encrusted crown jewels as you enter the apartment, which might just blind you with their sparkle motion.

Nina Petersen-Perlman has visited Paris on 13 different occasions, eight of which were during the last year when she was an English teaching assistant in a small town in Burgundy.